We recently got an email from Jeff from NY, who wanted to know if we could make a Black Cat Bass Octave Fuzz with top jacks instead of side jacks. I checked with Greg first to make sure there wouldn't be any complications, and after getting the okay was happy to tell Jeff it would be no problem. 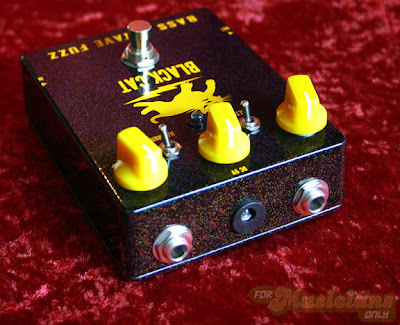 The only slight drawback would be that the silkscreen would still indicate side positions for the In and Out jacks. Jeff said that wouldn't bother him in the least, as long as the jacks were on top. This was a cool project to work on, and it turned out very nicely. The best part was getting this email we received from Jeff:

I received the pedal today... AWESOME! It sounds great, and thanks for moving the jacks to the top.

I have to say, the wiring and construction is meticulous and probably one of the finest pedals I've seen (and I've been tinkering with pedals for almost 20 years). As with most fuzz boxes, it sounds better with passive basses rather than active electronics, but it's such a nice fuzz tone.

I really regretted selling my old Black Cat Bass Octave Fuzz (the gray one), but now I have basically the same thing only much better! Best Regards, Jeff
Posted by For Musicians Only at 4:12 PM