Here's a video I made last week featuring some truly bizarre sounds I got using several Moog Music Moogerfoogers. I was playing around with some patches on my rack of Moogers and it ended up sounding so weird, I decided to make a video. All sounds in this clip are generated and modulated by Moogerfoogers. Not all of them are hooked up for this patch, but the ones that are include the MF-107 FreqBox, MF-101 Low-Pass Filter, MF-102 Ring Modulator, MF-103 12-Stage Phaser, MF-105 MuRF, MF-104SD Super Analog Delay, and CP-251 Control Processor (plus EP-2 Expression Pedal).

There were some very freaky vocal sounds happening here. Really weird (and kind of spooky when you're in a room alone with this stuff. Don't ask me how it was patched, I probably wouldn't be able to get the same sound again if I tried... BTW, I should dutifully mention that we sell the full line of Moogerfoogers at the FMO Gear Shop.
Posted by For Musicians Only at 8:27 AM No comments:

Here's a project that's been long in the making. In fact, it's not quite finished, but that's no reason to keep it hidden from everyone. So here it is... introducing the Chromatropolis! 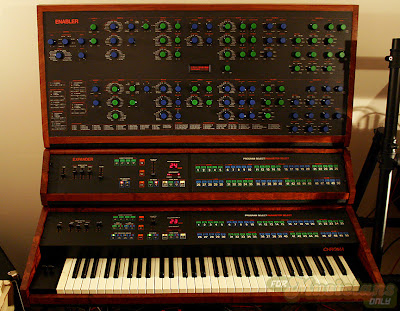 This magnificently monstrous assemblage of analog synth gear is comprised of the Rhodes Chroma, Chroma Expander, and a brand new Chroma Enabler. I have christened the three units collectively as the Chromatropolis. I thought it deserved a much grander name than "Chroma stuff" or "Chroma, etc." I also thought it would be easier to use a single name as way of referring to the three units, rather than having to say "Chroma, Expander, and Enabler" over and over again. As far as I know, I am currently the only one who has all three units.

For those of you not familiar with the amazing Rhodes Chroma polyphonic analog synthesizer, check out the Rhodes Chroma website, which has just about everything you could possibly want to know about this incredible instrument. You can even get the back-story on my own Chroma, which can be found in the Rhodes Chroma Instrument Registry. 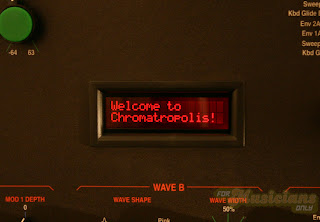 I acquired my Rhodes Chroma on trade in 2006 in non-working condition. It took a couple of years for me to get around to making it functional, but once I finally got to hear and play it, I was amazed. Then, gear fiend that I am, I just HAD to get a Chroma Expander (basically, a Chroma without the keyboard) to go with it. I finally found a Chroma Expander for sale around April 2009, so I eagerly bought it. I was told it was in good condition except that the power supply unit would need to be replaced, which is a common problem with the original Chroma. Since I had already done this on my Chroma, I figured it would be fairly simple to do on the Expander as well. Unfortunately, once I got the Expander and began replacing the PSU, I discovered there were a few other issues, not the least of which was corroded traces on the I/O board. The CPU had also suffered extensive damage from a leaky battery, but I had already planned on replacing that with the amazing CC+ upgrade. 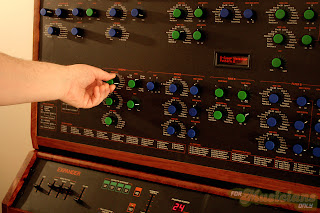 The Chroma Expander is still not functioning 100%, in spite of having work done by two different synth repair specialists. I was very fortunate to find a replacement I/O board, and installed both the PSU kit and CC+ that are available through rhodeschroma.com. At this point, six of the eight voices are working. I’ve already ruled out the voice cards as the issue, but haven’t yet been able to figure out the problem. But with the right help and the abundant resources on the Rhodes Chroma website, it’ll definitely happen soon enough.

Shortly after I got my non-working Expander, I had a custom Bubinga wood case made for it and for my newly working Chroma, which I previously wrote about in my blog entry from August 2010. The Bubinga Chroma and Expander cases were made by Wes Taggart of Analogics. Around the same time, I also installed the Chroma Pressure Sensor (CPS) kit, which gives the Chroma keyboard after-touch control of any parameter assigned to it. The CPS kit was made available to members of the ChromaTalk discussion list and was designed by one of the members. 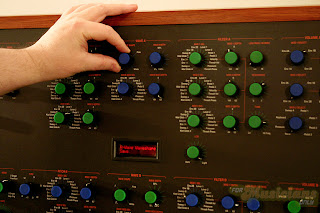 Now, let me tell you about the Chroma Enabler... The Enabler is a custom controller made specifically for the Rhodes Chroma. It was designed and built by Randel Osborne, who also owns a Rhodes Chroma and happens to live in Connecticut as well. Randel told me one day about this idea he had for making a controller for the Chroma that would enable the user to have manual control of all available parameters in real-time. He asked if I thought it was a good idea. I told him I MUST have one, please! Randel came over a few times during the course of his R&D to show me prototypes he was working on, which were much smaller breadboard units that only controlled a few parameters. It was great getting to watch the idea grow and develop, and he put a LOT of work into it. I think he’s made a total of seven or eight Enablers so far. The wood case for my Enabler is made of Bubinga to match the wood of the other two units. He also programmed the display to read “Welcome to Chromatropolis” on startup. You can read more about the Chroma Enabler on Randel’s website.

So that’s the story of the Chromatropolis. I’ve had it as shown in these pictures for a few months now, and it’s caused me to stay up much later than I intended on many, many nights since then. A Chromatropolis video is definitely on the short list of things to do this summer.
Posted by For Musicians Only at 4:40 PM No comments: