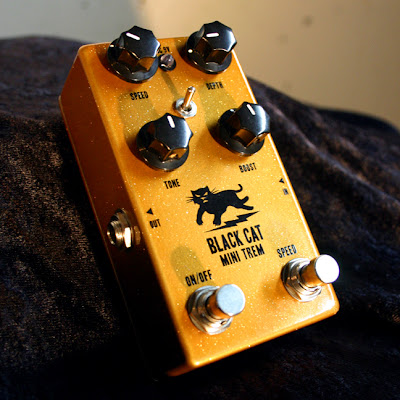 Here's a custom modded Black Cat Mini Trem we made a few months ago for Grant in Australia. Grant contacted us and asked if we could make a Mini Trem for him with slightly different features. Instead of having the second footswitch toggle between half-speed and double-speed, he wanted it to toggle between full tremolo depth and the regular variable depth, which is controlled using the Depth knob. He wanted to be able to go from an all out stutter/chop trem to a mild pulsing trem at the click of a switch.

So I asked Greg if he could do it, and of course he said it would be no problem. He also suggested that Grant didn't even have to lose the half/double speed option - we could just add a mini-toggle switch to handle that function. So that's what the toggle switch is for on this Mini Trem. Grant loved it! He even asked if we might someday make him a custom Black Cat Vibe and Mini Trem in one unit. Of course, we'd have to finish up the Black Cat Vibe prototype we've been working on first.

Posted by For Musicians Only at 11:56 AM No comments: