We got a custom pedal request a couple of months back from Brad Scott of Ontario, Canada. Brad wanted us to make him a Black Cat OD-1 with an independent buffered boost channel in a Mini Trem sized enclosure. In addition, he asked if we could add a mini toggle switch to reverse the order of the OD and the Boost. 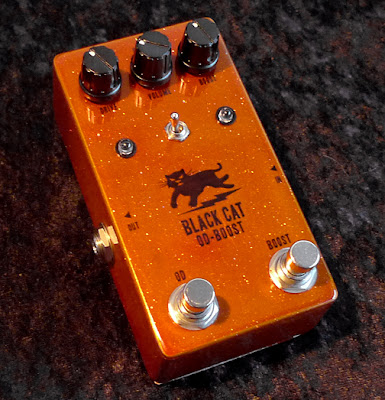 My first thought was that Brad really wanted to blow his speakers! The OD-1 is so insanely loud to begin with, I could only imagine what it would be like coupled with a boost. But it seemed like he had really put some thought into it and knew exactly what he wanted. I relayed all the info to Greg, and then Greg went about creating the Black Cat OD-Boost you see pictured here.

Okay, here’s how it works: the two footswitches give independent control of the OD and Boost channels (similar to the Black Cat OD-Fuzz). Each switch is an on/off for its own channel, so you can have just OD, just Boost, or both at the same time. There are Drive and Volume controls for the OD channel, and a single Boost knob to control the level of the Boost channel.

I have to say, the Black Cat OD-Boost turned out to be a GREAT idea (Thanks Brad!). The two channels compliment each other extremely well. There are so many useful combinations with the two circuits, especially with the toggle to switch the order of the two channels. Of course, it can be VERY loud if that’s what you want. But you can also get an endless array of gritty dirt tones, or just put some more muscle into what you’ve got already.

Here’s what Brad said when he got his OD-Boost:
“I've had the pedal for a few days now and I love it. It's a great addition to my pedalboard and it's incredibly versatile. I love the amount of output. It really overdrives my Dr. Z Maserati in a musical way. With the amp set on the edge of grit, it's like the boost adds a nice crunch channel and the OD adds a hot solo channel. And when they're cascaded, it's the Lava channel. LOL Great job, you guys!”
Posted by For Musicians Only at 4:13 PM