Two Different Shows in One Day 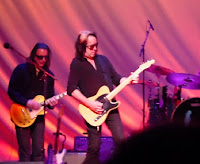 Things have been crazy/busy this past week, which culminated yesterday with being a vendor at the first ever Westchester Guitar Show, hosted by Rosehill Music Center, then leaving right from the guitar show to go see Todd Rundgren at the Ridgefield Playhouse. The show for this current tour is called "Todd Rundgren's Johnson" and features his band performing select works of blues legend Robert Johnson, along with many of Todd's own songs done up with a blues treatment. I went with Analog Mike, who had backstage passes and kindly invited me as his +1 guest. 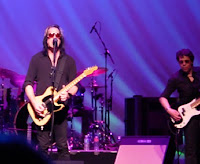 I've been a Todd Rundgren fan for many, many years and I've probably seen him over 20 times. So even though I knew the guitar show would be grueling and leave me exhausted, I told Mike I would definitely be attending the concert. We had the passes courtesy of Todd's guitarist, Jesse Gress, who's an Analog Man customer. Also playing was Todd's cohort and ex-bandmate in Utopia, Kasim Sulton on bass, and former Tubes drummer Prairie Prince. Mike suggested we give Todd a signed copy of Analog Man's Guide To Vintage Effects (great idea!). The show was great, and afterwards Jesse came out and took us backstage to hang out for a bit. Here's a picture I took of Jesse's pedalboard. 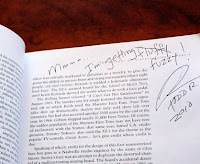 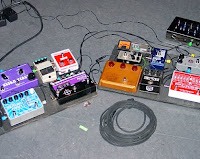 Eventually, we were ushered to the tour bus, where I finally got to meet Todd and found myself... well, a little tongue-tied, honestly. I did give him a signed copy of Analog Man's Guide though, and I also brought my own personal copy of the book (in which I collect autographs) for Todd to sign. He wanted to know which page to sign, so I asked him what his favorite pedal was. After a few chuckles and a little head scratching, he said, "Well, the first pedal I ever had was that brown fuzzbox... I think it was... a Maestro?" I quickly opened the book to the picture of the Maestro FZ-1 Fuzztone. He wrote "Mmmm... I'm getting fluffy fuzzy" along with his signature and the date.

Posted by For Musicians Only at 9:25 PM