Check out my custom, one-of-a-kind Analog Man King of Tone (artwork by yours truly). I built this myself, and I guarantee you there’s not another one like it in the whole universe! Okay, so you’re wondering what the deal is with this thing. Well, it’s quite a story. So get your milk and cookies, pull up a chair and I’ll tell you. 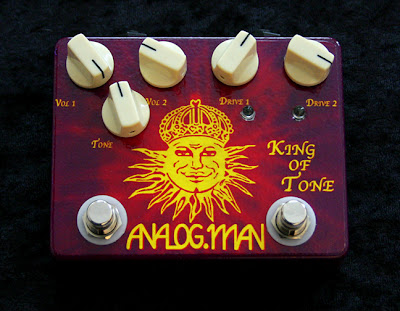 It all started sometime around the end of 2003, back when I was working at Analog Man. Analog Mike had just come up with the King of Tone. I remember him spending a lot of time working on the prototype with Jim Weider. Due to revisions based on input from Jim and from Mike’s Japanese collaborator, Obayashi San, the first production model was actually KOT Ver2. I believe King of Tone serial #1 went to Brad Whitford of Aerosmith.

I was on a kick of wanting to design artwork for the Analog Man pedals. I had recently designed a graphic for the Bi-Comp (the short-lived “gigantic white sun” version). Mike was quite fond of using rubber stamps for the graphics, which definitely made sense for all the custom work and one-off stuff. He picked out a rather nautical looking stamp for the King of Tone, which he seemed pleased enough with. But I want to see if I could come up with something better.

The graphic kind of evolved over time, becoming more and more elaborate. I spent weeks tweaking it and fussing over at. When I finally got a version that I thought was good enough, I showed it to Mike. He said he thought the king looked evil, and didn't seem all that into it. I didn't realize at the time that he felt like he wasn't even finished designing the pedal, much less ready decide on a graphic. He was reluctant to even sell the pedal until he got a chance to work out all the improvements he wanted to make. I think that was a big factor for how the waiting list got so long. Anyway, by the time I finished perfecting my King of Tone graphic, Mike had come up with a new five-knob version (KOT Ver3), which totally messed up the four-knob layout I had made. So I put the idea aside and just figured I would use it when I got to make my own King of Tone.

I had this running deal with Mike where he would let me make my own Analog Man pedals for my own personal use as long as I paid for the parts and didn't bother his techs too much. But when it came to the King of Tone, he thought it might not be fair to the customers on the waiting list if I jumped the line, even if I was going to make the thing myself. So basically, I got on the list and waited just like everyone else.

Sometime late in 2005, Mike was finally able to come up with a version of the King of Tone that he was happy with (KOT Ver4). It required a new PCB and had six knobs, so it would need to be housed in a larger box. In the meantime, he was offering people on the list the option of taking the current version right then, or waiting for the new one. A lot of people opted to wait, which meant that parts were finally available for me to make my own King of Tone.

I was excited at the prospect, and dug out the Photoshop files I had saved of my custom artwork. I spent even more time tweaking it and fussing over it. All in all, I think I have about 300 hours of design work into this thing. I redesigned the layout for a five-knob King of Tone. But I wanted to leave plenty of room for the graphics, so I decided I wanted to use one of the new larger boxes (I think that technically makes this a Ver3.5. Like I said, it's one-of-a-kind!) But by this time, I had already left Analog Man and started For Musicians Only. So the project sat in limbo for a few years while I worked on the business. I recently came across the old Photoshop files for the graphic and decided it was time for this king to finally take his throne.
Posted by For Musicians Only at 3:15 PM